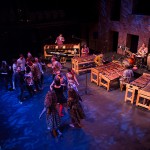 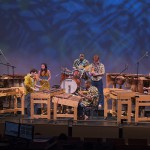 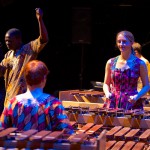 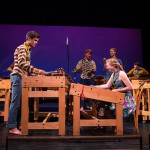 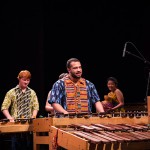 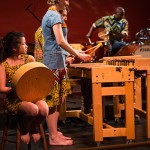 Zambezi, founded in 1992 by Ernest Brown, plays traditional music from Zimbabwe, Zambia and the African continent. They maintain a broad repertoire that embraces music broadly with a musical depth that is enhanced by the quality of student musicianship and orchestration that includes brass, woodwinds, strings and percussion as an expression towards hybridity.

The word “marimba” comes from the Bantu languages of Central Africa where it means “the wood that sings.” African slaves recreated marimba once they arrived in the Americas, beginning in the 1600’s. Today, marimbas derived from these instruments are played all over the world, including the marimbas and xylophones of European classical music, the vibraphone, the Mexican and Guatemalan marimbas, and many other mallet instruments. Ernest Brown designed a set of chromatic Zimbabwean-style marimbas that allow the Zambezi Marimba Band to play Zimbabwean songs and jazz compositions.

In the western United States, there are dozens of Zimbabwean-style marimba bands, which are an outgrowth of the Ethnomusicology Program at the University of Washington. However, marimbas have spread in the East Coast as they are found in the community, schools and colleges. In 1998, the Zambezi Marimba Band acquired a set of Ghanaian marimbas, which are called “gyil” in the Dagara language of northern Ghana. The gyil has a pentatonic tuning and a completely different playing technique from the Zimbabwean instruments. Zambezi has acquired  a selection of mbira from Zimbabwe and have learned a wide repertoire from different visiting master teachers.